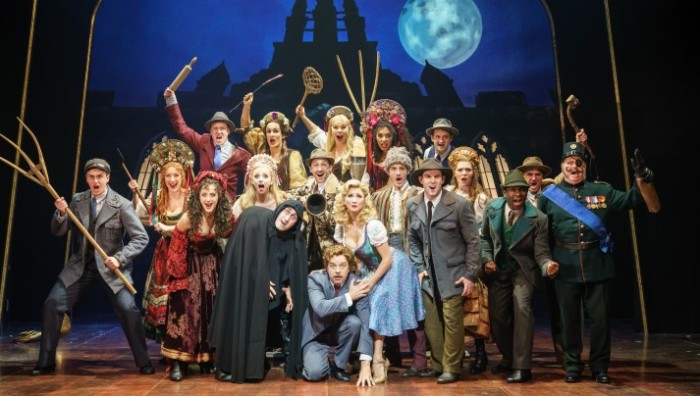 Young Frankenstein is written by Mel Brooks and based on his 1974 film starring Gene Wilder, so don’t go in expecting any deep insights into the nature of the world. What you get is a smutty, slapstick, laugh-a-minute show, full of quick, clever, off-colour punchlines. It is packed with song and dance routines, which come along so swiftly that you haven’t time to notice the poor ones before you are being entertained by the next one which might be more to your taste.

There are some good performances, Hadley Fraser shows that he can do farce in a rare comedic role. His voice is excellent as you would expect from an actor who has previously been in “Les Miserables” and “Phantom of the Opera”. Lesley Joseph is as good as Frau Blucher, hamming it up just enough, without going too pantomime. Cory English has taken over from Ross Noble as Igor and he is very good indeed, his experience of playing the role on Broadway working to his advantage.

The jokes are sometimes obvious and often telegraphed but the direction is clever in making us enjoy the expectation of the punchline as much as the delivery itself. This is particularly evident in the scene involving the monster and the blind hermit. There are also nice homages to bygone musicals in the songs, “there ain’t nothing like a brain” and “the Liths in Lithuania, do it” are two lines that spring to mind. The show stopping number however, is the one song that is not an original. Irving Berlin’s “Puttin’ on the Ritz” is fantastically choreographed, inventive, surprising and funny; it will have you smiling at odd times for hours after you leave the theatre, remembering the routine.

Young Frankenstein is not profound, it is not ground-breaking, it is not even particularly original, but it is funny, it is fast and it is a very good evenings entertainment. I enjoyed it and judging by the reaction at the close, the rest of the audience enjoyed it too. Recommended.