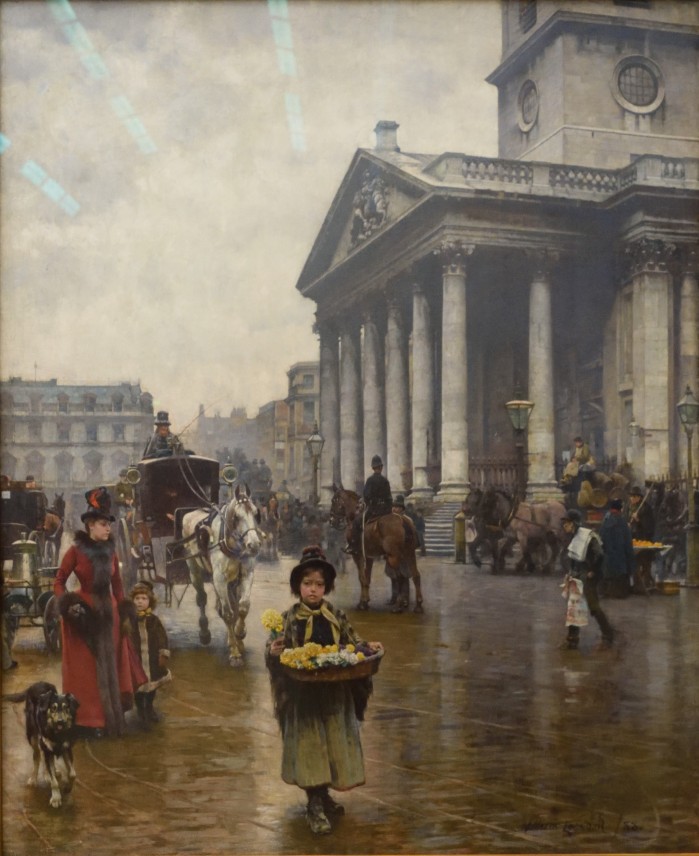 The painting above is of the NE corner of Trafalgar Square and St. Martin-in-the-Fields in 1888.  It hangs in Tate Britain and it is by William Logsdail. In case you missed it, the first part of my paean to Trafalgar Square is here: Love London, Part 1. Trafalgar Square, Nelsons Column and Charles I, London WC2.

On the lower northern wall of the square are busts of three First Admirals of the fleet; Cunningham,  Jellicoe and Beatty. Admiral Andrew Cunningham was distinguished veteran of WWII and his bust was added after the other two in 1967. Jellicoe and Beatty are Admirals of WWI and their busts were placed in 1948, facing Nelson, “Hero of the fleet”. I hope it is true that they both admired Nelson as much as they are supposed to, because upon their deaths, in late 1935 and early 1936, they were both entombed in St Paul’s Cathedral, also facing his tomb. 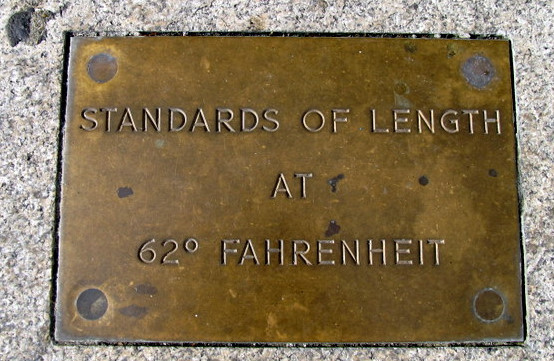 Also on the lower northern wall of square is an often overlooked historical treasure “The Trafalgar Square Standards”. They are low down along the steps and in the wall behind the seats. These were the official British Imperial measurements of length until we adopted the metric units of measurement in 1995. These were set into stone, by the Standards Department of The Board of Trade, in 1876 and if you suspected that any measuring implements were incorrect you could bring them here to settle the argument. There are three sets of these official standards, the others are in the Royal Observatory in Greenwich and in the Great Hall of the Guildhall in the city. The official measures included are; the inch, foot, yard, link, chain, perch and pole. 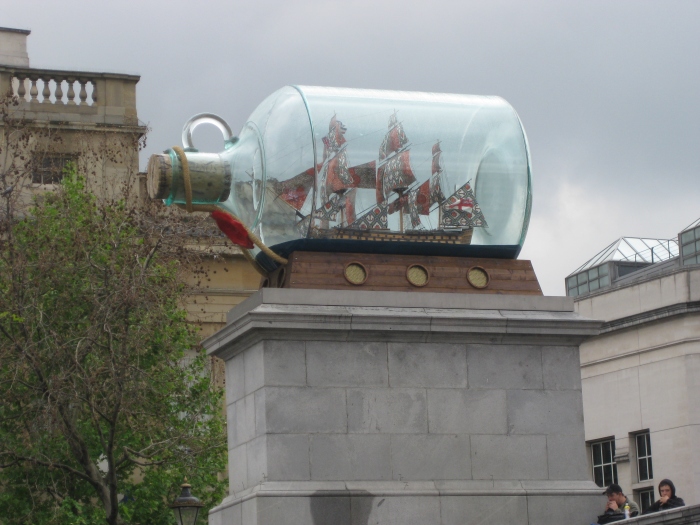 The fourth plinth was intended to hold a statue of William IV. It was empty for over 150 years until 1999 when it was decided to put a succession of works of art on the plinth, each occupying it for a limited amount of time. These art pieces have generated a great deal of debate over that past twenty years and, in that respect, the concept has certainly been a success. All of them have been controversial, most of them have been innovative and some of them have been attractive. Among the more memorable are; Anthony Gormley’s “One & Other” where over the course of 100 days, 2400 different people each spent one hour on top of the plinth, Marc Quinn’s “Alison Lapper Pregnant” and Yinka Shonibare’s “Nelson’s ship in a Bottle”. The current incarnation, Michael Rakowitz’s “The invisible enemy should not exist” is a recreation of a sculpture of a Lamassu (a winged bull and protective deity) that stood at the entrance to Nineveh from 700 B.C. It was destroyed in 2015 and this piece is made completely from empty Iraqi date syrup cans. I find it beautiful. 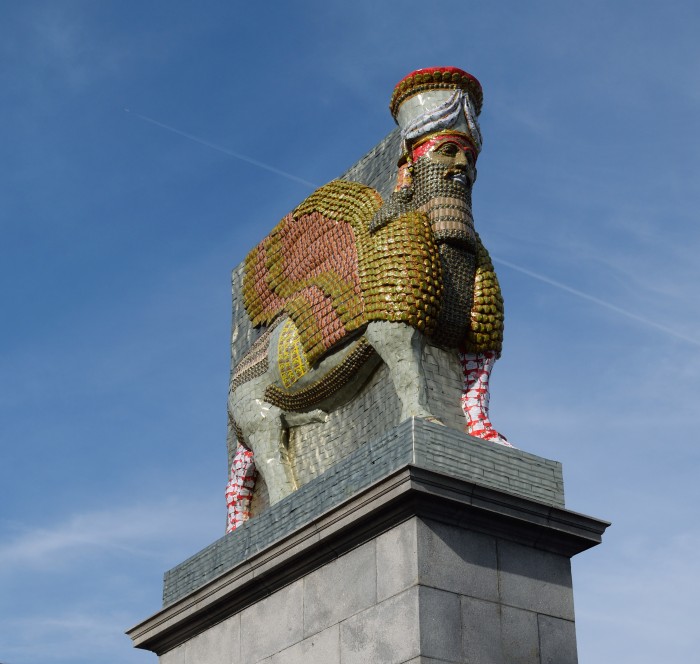 On the South Eastern corner of the Square is a round edifice with a light on top. This is claimed, by some, to be the smallest police station in the world. Put in temporarily in WWI but made permanent during the general strike of 1926, it is a raised room from which a policeman could stand and watch the square in order to phone Scotland Yard, if a demonstration in the square showed signs of becoming dangerous. When the light was changed from gas to electric, the light used to flash when the phone rang, in case the assigned policeman was patrolling the square. 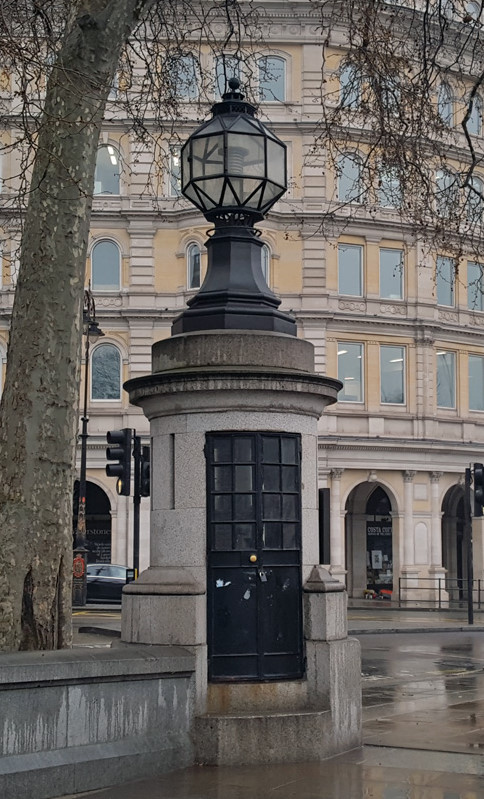 I have a couple of pieces other random trivia about Trafalgar Square. The north side of the square is substantially higher than the south. This slope is not natural, the south end was lowered in order to made the National Gallery building more imposing. The earth was used to level St James’ Park.  Adolf Hitler planned to remove Nelson’s column and statue from Trafalgar Square when Germany conquered Britain. His intention was to place them in Berlin as a victory trophy.

While you visit Trafalgar Square, you should visit St Martin-in-the-fields on the NE corner and the National Gallery. I plan to do separate pieces about these. I will put links here when I have completed them.  Also, on the South side, between Whitehall and The Mall,  there is an unobtrusive hotel called The Trafalgar. This is a smart hotel and if you go to the back you can catch a lift up to a rooftop bar. The cocktails are central London prices, but they are good and the roof terrace has lovely views over the square.

Literally a few steps away from the hustle of Borough Market is the calm oasis of Southwark Cathedral. It is a wonderful mixture of old and new. It contains a wooden effigy of a knight from the 13th Century, reputedly the oldest in Britain and its Northern cloister was opened in 2001 by Nelson Mandela.

There are monuments and memorials from many time periods in between. There is a stained glass window and bas-relief dedicated to Shakespeare, his brother Edmund is buried here. The Cathedral is on the South Bank of the Thames where many of the theatres used to be in Shakespeare’s time.

There are tombs of quite different types, from the multi-coloured wooden one of the poet, Thomas Gower, a contemporary of Chaucer, to the more austere and eerie one of Thomas Cure, a 16th Century parliamentarian.

There are memorials to those who lost their lives in both the first and second world wars, victims of the Marchioness sinking in 1986 and Isabella Gilmore, the first deaconess of Southwark. There are also monuments to both Nelson Mandela and Desmond Tutu. 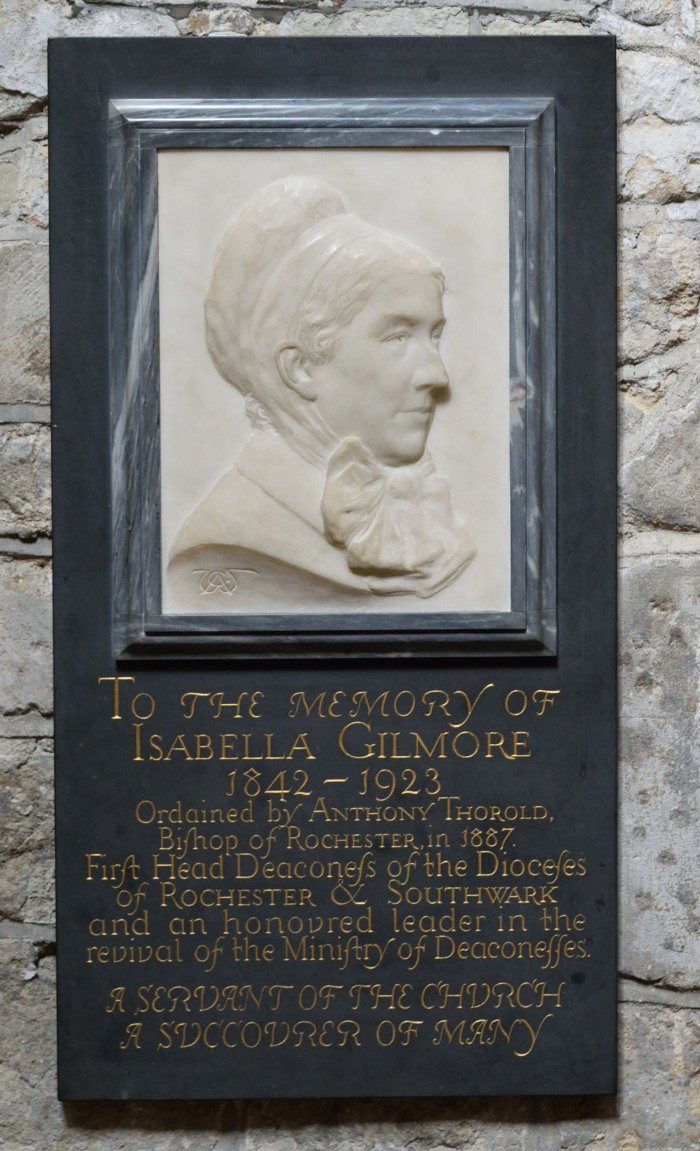 While you are here don’t forget to look at the fixtures and fittings in the building. The black marble font and outrageously ornate wooden cover, at the nave of the church is one highlight, the eagle lectern, near the altar is another.

Added to all this is the architectural splendour of the Cathedral. There are details here from a whole range of different engineering periods. The vaulted ceilings in the main church are beautiful, but the marble bricked ceilings in the naves are equally so. 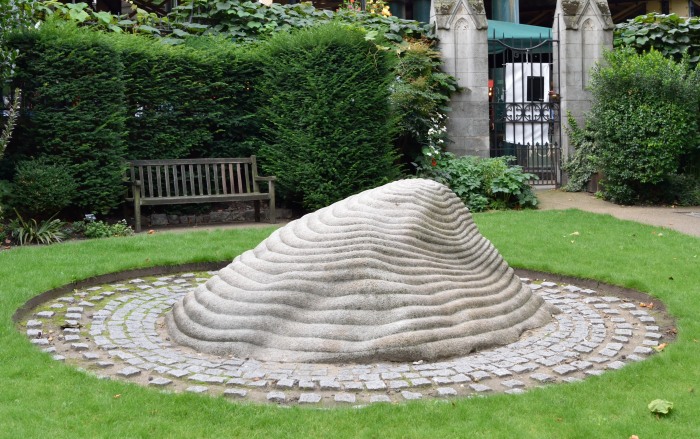 Walk through the church into the garden and you can sit in verdant peace, with the noise of the market in the background. There are a couple of unusual sculptures here, but the flowers are beautiful. An often overlooked gem in the heart of tourist London, just the place to dip in to, if you feel the need to step out of the boisterous city for a quiet break.

This isn’t the cheapest of the many tours in Kaikoura, but we enjoyed it and found it to be good value for money.

We liked the fact that if you don’t see a whale, they will refund 80% of the ticket. We reckoned that meant they must be pretty confident and indeed it turned out be the case.

We saw a sperm whale very close, and many many dolphins, also albatross. The guides were witty and informative. They do warn about seasickness and there were some who were but I recommend this trip heartily.