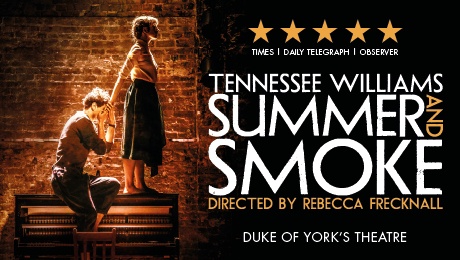 Summer and Smoke had a successful run at the Almeida theatre earlier in the year. The reviews at the time were ecstatic but tickets were impossible to get, so it was great news to hear that it had been given a West End transfer. When it was first produced, in 1948, it was the follow up to “A Streetcar Named Desire” but it did not match that play’s success. There have been revivals in the intervening years, but the only successful one has been the off Broadway version, with Geraldine Page as Alma, that was eventually made into the film with Laurence Harvey as John. Geraldine Page received an Oscar nomination for that part.

The set is a bare brick wall with seven pianos set in a semi circle facing it. These are played at the start, finish and at dramatic moments through the play. The rest of the stage is basically empty, save a few chairs brought on and removed as they are needed. The setting is the American deep south in the early 20th Century, classic Tennessee Williams territory. The story is too, a tale of unrequited love struggling against unbridled lust, set in a small American town in the sweltering heat of summer’s sultry climate.

Director, Rebecca Frecknall, has taken the decision to make this production revolve totally around Alma Winemiller. She is almost always on stage and on the rare occasions when she is not central, we are thinking about how this will affect her state of mind. This is a bold directing decision, but perfectly vindicated by Patsy Ferran’s performance as Alma. She is phenomenal, it is a career defining role and she drags us through every high and low. One of the toughest things for an actor to do is bring the audience with them when they have a life changing epiphany which totally reverses their world view, Patsy Ferran does this remarkably well, and if she does not win awards for her acting in this play, then I cannot wait to see the performance that beats it.

The rest of the cast are excellent too and provide brilliant support. There are a couple of moments where music is used to heighten the drama. Both of these are chillingly good. Anjana Vasan has a beautiful blues voice, when she sings in the casino. The slow motion sequence during the shooting, which I think used a Portishead track, has an ethereal, poetic quality that raises the production to a more abstract, surreal vision than we are used to seeing in a Tennessee Williams play, and this worked very well.

I enjoyed this production, it was brave enough to approach Tennessee Williams in a more lyrical manner than usual, the added musical dimension, although lightly used was very effective and it will endure in the memory for the amazing performance of Patsy Ferran in the leading role.

Follow The London Lark! on WordPress.com
Join 11,212 other followers