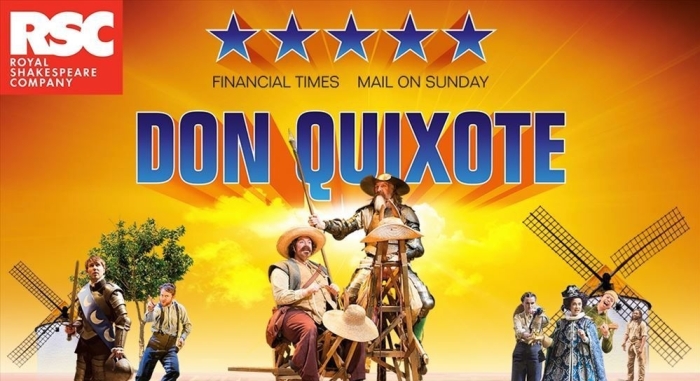 The Royal Shakespeare Company have gone the whole hog in this version of Don Quixote.  They commissioned James Fenton and Grant Olding to adapt Miguel De Cervantes story for a modern audience and the pair have come up with a show that feels contemporary but true to time in which it was written. With audience participation encouraged and the cast entering and exiting through the stalls, it feels like a show that would have worked very well in the Globe Theatre even in the 17th Century.

David Threlfall is Don Quixote. He plays him as the straight man to Rufus Hounds’ Sancho Panza. This works very well as we care for Quixote, the fantasist who sees the world as he wishes it was. Panza is his faithful squire who sees the real world but makes sure that we are laughing at the situation not at the man. They make a fantastic double act, Rufus Hound improvises and involves the audience while Threlfall is too involved in his windmills to notice.

Audience participation is a large part of the show, it has a panto feel in places. Some of the comedy is slapstick and it is still funny – a sweary monk as he trips over an audience members foot, a bun fight between the cast and the audience. However, there is more to the show than this, it has so much going on that catching it all in one viewing is unlikely. The songs are good and give the piece an Andalusian atmosphere. There is puppetry that is both attractive and clever. The lion is spectacular and the hawk is funny. The horses are brilliant and their interaction threatens to steal the scene on a number of occasions.

The Don Quixote that we see these days consists of two books, the original and the follow up. The second was written roughly a decade after the success of the first, it tells of the exploits of Don Quixote after he becomes famous and this show retains that tradition. Often it leads to a change in tone between the two acts. Here is it handled cleverly by making the Duke and Duchess, nicely played by Richard Dempsey and Ruth Everett, into caricatures of pantomime villains, so their cruel tricks are jokes on them rather than our hero Quixote.

The ending of the story is done well, Rufus Hound has surprising depth, having laughed with him through the show, we feel his sadness at the end. Don Quixote has the last laugh though and we can be moved and still grin at his ascent to heaven.

The RSC have invented posh panto. A show that an Eton educated ex prime minister might take his son to see.  This show is a blast from beginning to end, great fun and a great night out. It deserves to be this year’s big Christmas hit.

Follow The London Lark! on WordPress.com
Join 11,134 other subscribers