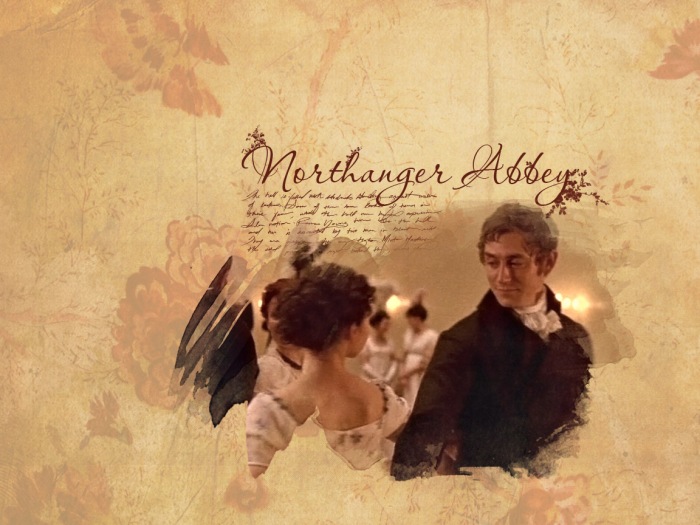 Northanger Abbey was actually written in the final years of the 18th Century but was not published until after her death in 1817. Although it has similarities in style and content to “Sense & Sensibility” and “Pride & Prejudice” there are also some major differences.

It is a comedy of manners, but it is more a satire of the gothic novels that were fashionable at the time. So, it does make gentle fun of the contemporary styles of the day, but this book is more specific in its target than her first two novels. This is not to say that she is not just as funny when pointing out the differences between what is said and what is meant in genteel society at that point in history, but this is not the main thrust of the novel.

The story is laid out in the style of a gothic horror novel, with many things foreshadowing dark happenings in the imagination of Catherine, our heroine. These intrigues usually turn out to be much more mundane, such as her discovering that the scrolls found in the desk are only an old laundry list. The books mentioned in the Northanger Abbey are real novels that were popular at the time and, Austen’s knowledge of their content and style shows that, she must have enjoyed reading them herself.

Catherine Morland is much more the ingénue than the usual lead character in a Jane Austen novel, she takes longer to notice when people are behaving badly towards her. This gives the author the opportunity to write some particularly materialistic and vain characters, she is merciless and sharp with these.

This book feels much less a Regency romantic comedy and more the story of an imaginative 17 year old girl leaving home for the first time. Catherine comes of age by realising that the world she has read about in her books is not quite the same as the world she occupies in real life. This gives it a universal truth that is just as true today as it was when it was first written.

In conclusion, although Northanger Abbey, would probably not be my first recommendation as an introduction to the novels of Jane Austen, it is nevertheless, a fine book and worthy of its place as a classic of English literature.